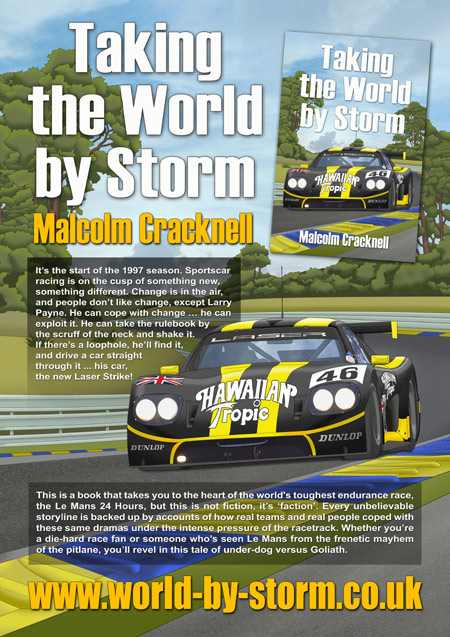 When Malcolm told me he was writing a book, my interest was obviously piqued. I mean, who else could tell a story like him. When I had the unfortunately rare opportunity to be around Malcolm, the laughter would come in waves, overwhelming any other activities that were going on or should be going on. It instantly brought back many long days and/or nights at the track when Malcolm would get on a roll. One late night in a hotel somewhere outside of Atlanta for Petit Le Mans particularly comes to mind. Man, when the stories went way too late and the noise from our room caused great distress to our neighbors. I miss those days…

Fast forward to current times. The book arrived in the mail and I anxiously tore open the envelope to examine the contents. Knowing I had no real time to dig into the story, I found on a quick thumbing thru that the appendix and epilogue contained stories. While some seemed familiar, reading them brought me back to the many trips like mentioned above. I soon realized the stories I was reading were familiar because they were as if being told by an old friend.

One concern I had going into the book proper was how I would be able to deal with what is considered a “factional” book. As I got into the story, it all made sense – how Malcolm wove it, combining events that actually happened in various times and places with the main story about an underdog trying to make a shoestring effort all come together for the big race. It all made sense and made a compelling story.

One of the most insightful things was what occurred before the actual race – the ups and downs that a team, especially one short of funds goes thru in developing a car. It ain’t easy and many compromises and decisions were made that were the results of both timing and budgets. That’s real world stuff there. But in these times of BOP and buying, not designing cars, stories like this are becoming more the exception than the rule. Yes, getting a car ready isn’t always easy, but it is further complicated by building a car totally by scratch – ala 1997.

Another aspect that is interesting in the book is that while the Storm team is the focus, there is also a quite detailed rundown of the 1997 race as it actually occurred, that is at least if the team we are focused on is removed. That is a clever touch and one that is greatly appreciated, especially by one that I was only able to observe this race via whatever media was available back in the day.

In short, this book was an excellent companion on my drive to the Monterey Historics. After a 12 hour drive the first night, all due to taking a scenic route, the book kept me enthralled through a night of barely sleeping. Did I mention I’m old now? The next night, I finished the book and was left wanting more. That to me is the sign of a good read. So yes Malcolm – I too was able to match Michael Cotton and read it in two days. If time permitted, I’d likely been able to read it in a day. It was that good.

Do yourself a favor. Buy the book and set aside some time to read it. You’ll thank Malcolm later.