It seems to become harder and harder to become completely lost in a motorsport book. With so many titles being autobiographical — recalling certain races, cars, conversations — all too often you find yourself inhabiting some corner oif the Internet down a rabbit hole of related Google searches.

That doesn’t have to be a bad thing, as you pick up occasionally interesting titbits and broaden your knowledge. But there’s certainly a space between that sort of interrupted reading and getting utterly emerged in some variety of fiction thriller — when you let your mobile go to answerphone and leave emails unread. 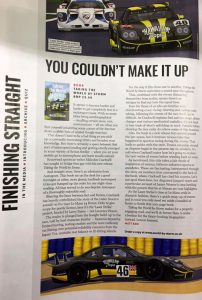 ned sportscar writer Malcolm Cracknell has sought to bridge that gap with his new release, Taking the World by Storm.

And straight away, there’s an admission from Autosport. This book sat on the desk for a good fortnight as other, more glossy, motorsport titles got bumper up the order for our night-time reading. All that served to do was to deprive Autosport of a thoroughly enjoyable read.

Blurring the lines between fact and fiction, Malcolm Cracknell has heavily embellished the story of the Lister Storm’s assault on the Le Mans 24 Hours. Only, to give scope for poetic licence, here it’s the ‘Laser Strike’ project, headed by Larry Payne — not Lawrence Pearce.

The reader is plunged into the fraught build-up to the race, told by the lead character Smithy — financial depravity, limited testing, testing crashes, and the team endlessly vacillating over potential reliability concerns from the Jaguar V12, unstable rear balance, or ill-fitting wheels.

For the way it flits from one to another, Taking the World by Storm maintains a sound paced throughout. That, combined with the events distancing themselves from reality, means there’s an intrigue in finding out how the squad fares.

Even for those of us who are familiar with documenting a race via lap-charting and endless note-taking following the events of the race itself can be difficult. As Cracknell explains fuel and tyre stops, driver changes, and various mechanical maladies, it’s not hard to lose track of what’s unfolding on the circuit. Periodic tables showing the race order do relieve some of this however.

Also, the book is a new release, but centred around the late 1990s, but it borrows various tales that happened in sportscar racing in the 2000s. That leads to quirks with the style. Tenses can jump around as chapters begin in the present day or, similarly, it’s odd when Cracknell states how he’s going to explain the next series of events before winding back 22 years.

As mentioned, this title takes a fair chunk of inspiration from various hitherto unknown sportscar anecdotes. These are fascinating. Interspersed through the story are numbers that correspond to the back of the book, where Cracknell has cited his sources. Let’s not spoil them here, but disguised jump-starts a particular account of James Weaver’s time battling with the powers-that-be at Nissan are true highlights.

As the Laser Strike’s time at Le Mans ends in dramatic fashion, there’s a quick wrap-up of events and in total you only need to set aside a handful of hours to finish this 200-page book.

Taking the World by Storm makes for a properly engaging read, and next time we’ll do better than to make a beeline for the fancy-looking biographies instead. Lesson learned.